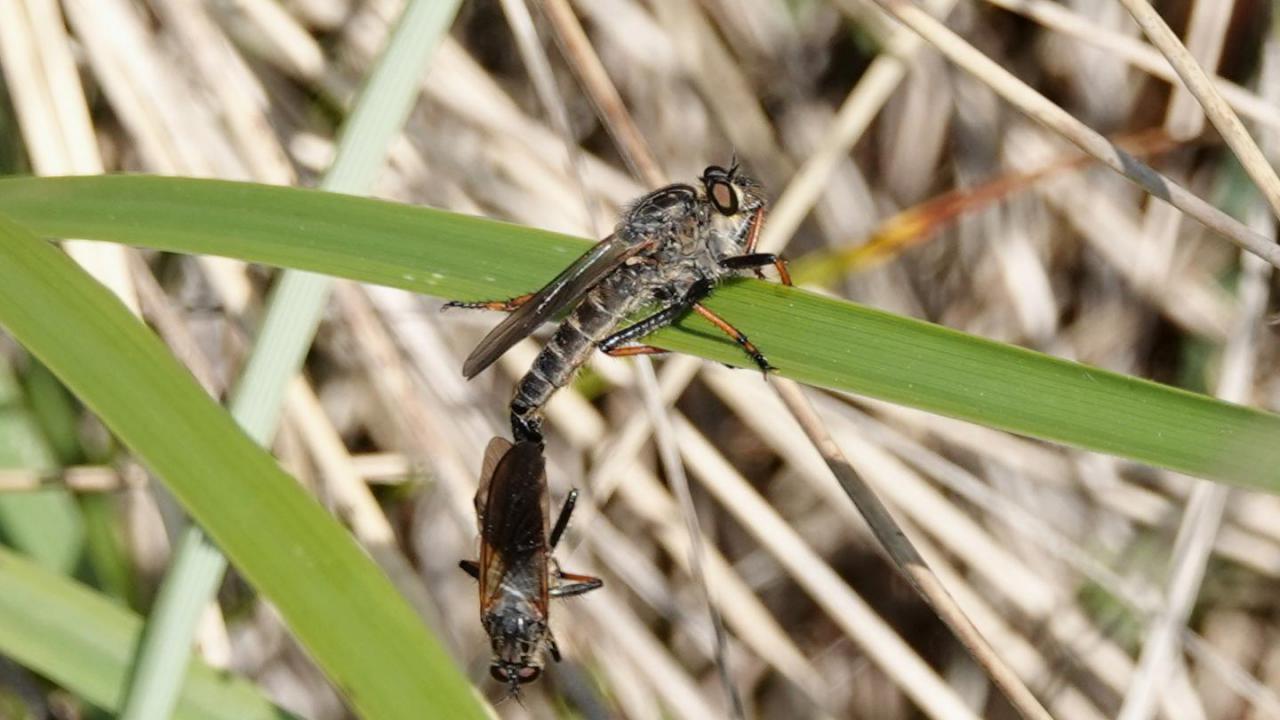 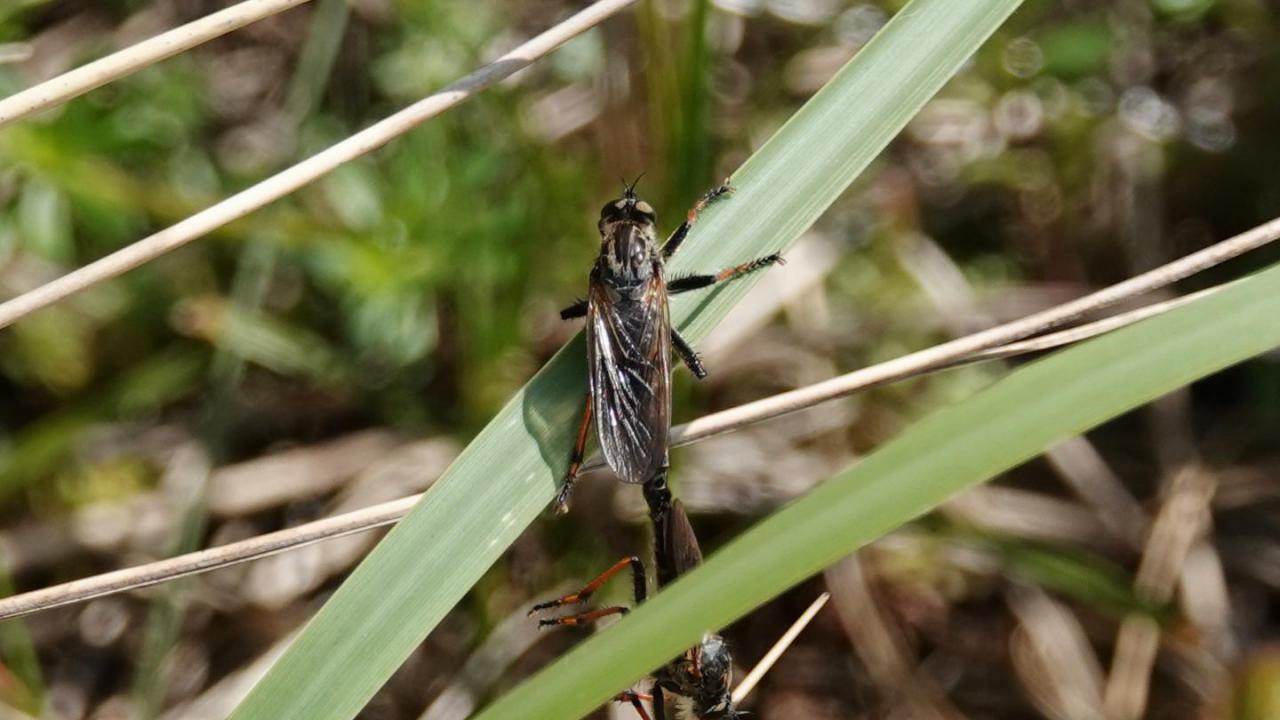 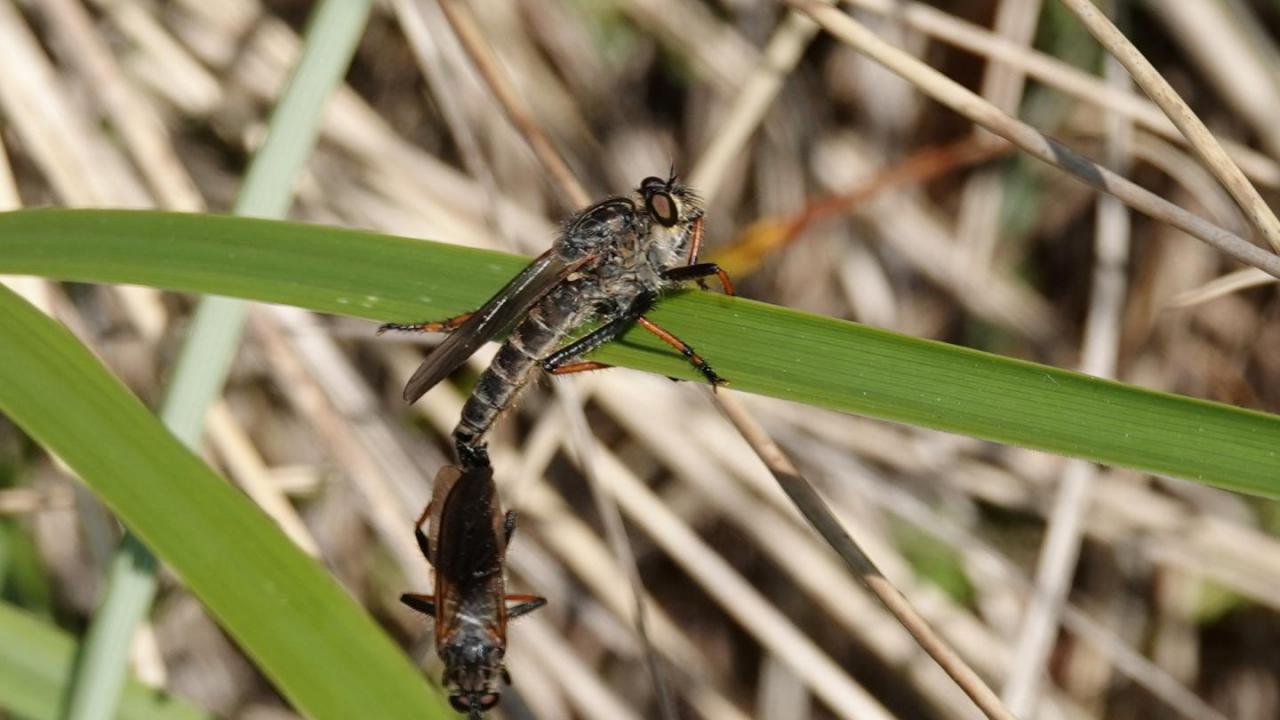 Pamponerus germanicus is a Robber Fly (Asilidae family).
Robber Flies are also called Assassin Flies.
There are over 7000 described species of Robber Flies.
They are powerfully built, bristly flies with a short, stout proboscis (elongated mouthparts used for feeding).
The name "Robber Flies" reflects their notoriously aggressive predatory habits; they feed mainly or exclusively on other insects and as a rule they wait in ambush and catch their prey in flight.
In general, Robber Flies attack a very wide range of prey, including other flies, beetles, butterflies and moths, various bees, ants, dragon and damselflies, ichneumon wasps, grasshoppers, and some spiders.
They do so apparently irrespective of any repugnatorial chemicals the prey may have at its disposal.
A Robber Fly attacks its prey by stabbing it with its short, strong proboscis injecting the victim with saliva containing neurotoxic and proteolytic enzymes which very rapidly paralyze the victim and soon digest the insides; the fly then sucks the liquefied material through the proboscis.

Pamponerus germanicus is a large brown Robber Fly (17-21 mm) with a large center tubercle on the face, which is covered with a dense beard.
This fly has black thighs and red shins.
The wings are strikingly bicoloured, with the tip half darkened brown; in the male the wings are white at the base.
The bi-colored wings make this species quite easy to distinguish from other species with black thighs and red shins, such as Neoitamus species and Paritamus geniculatus.

This is a fairly common species in The Netherlands that is mainly found in the central Dutch coastal dunes and spread over the higher sandy soils in the interior.
The flight time is from early May to early July.

A male and female mating. Egmond aan Zee, The Netherlands, 30 May 2021